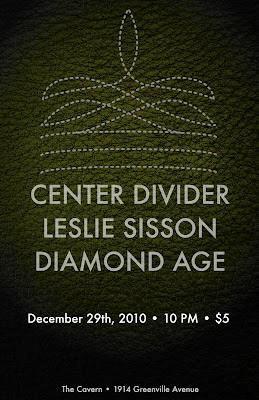 This has been a crazy year indeed... Since May, mainly thanks to my good friend Daniel and his excellent "New Fumes" (and persistent prodding) I have played to varying degrees of success... This has usually been in front of fewer than 20 people! I wouldn't have wanted it any other way, except for if a bunch more people showed up- that'd have been cool. I've learned alot about "going solo" and I hope to get a large chunk of recording and rehearsing done to round out the year- I can say that 2011 will definitely be "interesting"...More on this in the near future!

Center Divider is Christian Lee, a former Denton kid who became a man out in the big old world...someone I'm always glad to have crossed paths with over the years. He spent some time running game in London, then moved to (sometimes) sunny Brooklyn and from what I've heard is slowly but surely making it all happen for those lost souls in the big city...He has returned to share some of what he has learned since his departure and he has recruited some great local musicians (i.e. old friends)...

There's a great story about one SXSW many years ago in a hotel room that the Barton girls had, but I'll spare everyone involved because my foggy memory of that night may be completely off the mark... Nonetheless, I'm extremely excited to round out the year playing this show! and I will be at the show in Denton the night before at *Dan's Silverleaf.

I remember seeing Leslie Sisson around when I lived in Austin. She left Texas shortly after I moved there so I didnt really know her that well... I bought a Marantz tape recorder from her at her garage sale the weekend before she left town to hit the big time in Brooklyn some years ago. She will be playing some of her solo material at both shows.

**NEW YEARS RESOLUTION- I will play Dan's in 2011. This is a warning to Jimmy the soundguy, who I will surely be bumming out that night one way or another.

***for those keeping score, which most definitely is just me- the real show #11 was Aaron Teel and Baldomero's Dec 18th house show/party with LYLE DARIN of the December Boys and ROYAL BUTCHERS

****This is another great flyer from the multifaceted Emil Rapstine
Posted by M. Leer at 9:35 AM